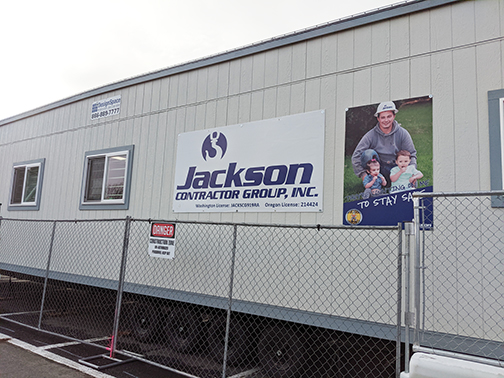 Jackson competed with seven other bidders for the Pioneer renovation project, set to renovate the 1950s structure resulting from the $65.6M school construction bond overwhelmingly approved by voters in November 2018. Jackson Contractor Group, Inc. edged out Central Oregon's Kirby Nagelhout with a bid of $19.39M compared to $19.54M.

"In my 20 years of overseeing many large-scale construction projects for multiple districts, this was the greatest turnout and one of the closest bid-day contests I have experienced," said Superintendent Dr. Wade Smith. "We were so delighted to see such great interest from general contractors and even happier to see the project awarded to another firm with a substantial Walla Walla footprint."

At the high school, as the new science building and underground utility improvements near completion, the district is set to begin substantial facility improvements across the campus. The high school project, delivered under the GC/CM (General Contractor/Construction Manager) model, allowed the district to break up and competitively bid each of the components of the project into approximately 50 different packages. "The utilization of GC/CM allows us to phase and package the components of the project, maximizing the opportunity for local contractor involvement among other benefits," noted Smith. "While it made for a long bid opening process, where nearly 100 bids were opened, it appears to have been a very successful day for many local Walla Walla businesses."

While contracts with subcontractors cannot be issued for another week due to state match processing, many local businesses appear to have been successful following bid opening. Local companies Houk Masonry, Gillespie Roofing, Cutting Edge Plumbing and Jackson Contractor Group, Inc. were some of the apparent low bidders, bringing tens of millions worth of work home to local contractors and vendors.

Bids for both the Pioneer and Wa-Hi improvements, supervised and reviewed by the district’s community-led Bond Oversight Committee, came in on budget and in line with estimates. As soon as state processing procedures are complete, the district will immediately begin renovation work on both campuses. At Wa-Hi, consistent with the phased approach, work will begin immediately on the old science building, the fine arts addition, fitness addition, and culinary, art and pottery improvements. At Pioneer, renovation of the original 1950’s wing and core area will be the first addressed.

For more information, including access to live construction cameras and project renderings, visit the district’s bond web page at www.wwpsbond.org.