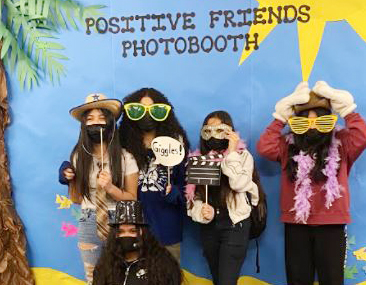 This week Pioneer Middle School launched its Sources of Strength Positive Friends Campaign. In first period, students wrote the name of a positive friend on a post-it note and those post-it notes are being added to a large wheel in the cafeteria. They also have a photo booth set up during lunch this week for students to take pictures with their positive friends. The students are also being encouraged to write thank-you notes to friends or adults who are a source of strength in their lives.

When asked why positive friends are an important Source of Strength, students said - "They help keep you positive and support you through your hardest times."

Next week Wa-Hi starts its Sources of Strength Mentor Madness. Staff and students will be competing in games at lunch on Tuesdays during March Madness bracket style.

“The staff participating were nominated by students as being someone that supports students and is there for them,” said Mental Health Specialist Kristen Duede, who is coordinating the Sources of Strength program. “The rest of the school was given a blank bracket to fill out and turn in.”

Prizes will be awarded to students with the highest score on their bracket. The social media group has made posts, the art group has put up posters around campus, and the film group will be filming the games to post on YouTube.

Lincoln High School is working on a rock painting event in April and will be distributing the rocks around town. They also received a grant and will be painting a mural at Veterans Memorial Golf Course.