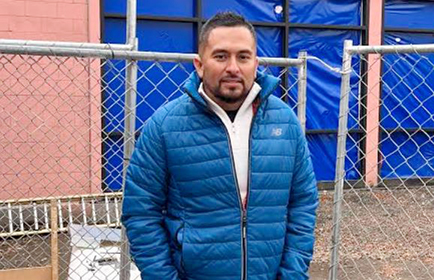 Pioneer Middle School Intervention Specialist Javier Hernandez was born in Jungapeo, Michoacan, raised in College Place and Walla Walla and graduated from Walla Walla High School in 2002. He went on to earn an Associates of Arts degree from Walla Walla Community College and a bachelor’s degree in liberal arts with a minor in history from Washington State University (WSU). He is currently pursuing a master’s degree in teaching through WSU Tri-Cities.

Javier says education is the most rewarding career. He enjoys being part of students’ progression and supporting them to overcome their barriers and challenges. Javier considers his father, longtime former district employee Javier Hernandez, Sr., as his most influential educator. His father came to the United States as an immigrant who worked in agricultural fields, canneries and the lumber industry. Javier says his father never stopped dreaming of someday serving families and students in the community of Walla Walla. His father’s endeavor to guide and support disadvantaged students and families in Walla Walla inspired Javier to look up to him. Javier says his father always stressed -- “Lo que hagas en la vida siempre da lo mejor de ti. Whatever you do in life always give your best.”

Another educator who has influenced Javier’s life is Sergio Hernandez. Even though they are not related, Javier considers Sergio to be part of the family since he has known him since he was 7-years-old. Javier says Sergio has guided and supported him throughout his professional career. Javier appreciates Sergio’s wisdom and counsel in helping him be successful professionally and personally.

Javier says former Sharpstein Principal and Assistant Superintendent Laure Quaresma has been a tremendous influence in his life. He says it was a privilege to work for two amazing, devoted and talented educators -- Donna Keyt Austin and Terry Morgan. Both educators taught him patience with elementary students. Javier also has fond memories of working with Wa-Hi Principal Ron Higgins. When Ron was the assistant principal at Pioneer Middle School, Javier learned strategies from him to better assist students academically, socially and emotionally as an intervention specialist.

Javier gives back to his community as volunteer soccer for Parks and Rec the past eight years. He considers himself a nature lover and enjoys taking his dog to rivers and lakes. You will often find Javier taking long walks or hikes with his wife and kids. Javier and wife Leticia Pedroza have three children; Dennise Hernandez - senior at Wa-Hi, Javi Hernandez - junior at Wa-Hi and Josue Hernandez - 1st grader at Edison Elementary School.