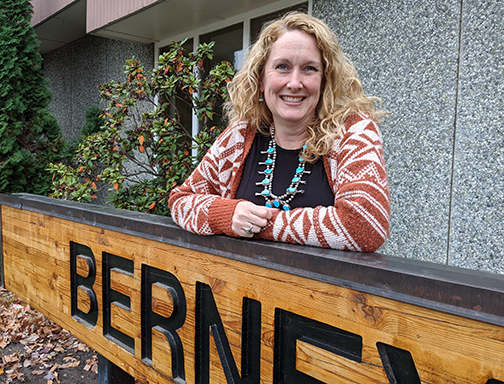 Berney Elementary secretary Lisa Davis loves being around children and their families. She was born in Seattle, WA and graduated from Mt. Rainier High School in Des Moines, WA and has an Associates of Arts degree from Walla Walla Community College.

Lisa says her Junior High English teacher Mr. Gabrio was her most influential educator while growing up on the westside of the state. She was placed in his 7th grade class and he soon became her mentor as her parents were going through what Lisa says was a tumultuous divorce. Mr Gabrio cared deeply for his students and made sure Lisa was in his classes all three years she was on campus. He instilled a love of writing in Lisa through his engaging and funny lessons. He often wove fantastical or funny stories on the chalkboard while the class diagrammed sentences. He encouraged kids to have grit and was using social/emotional learning skills long before they became standards in education. Lisa recalls how Mr. Gabrio coordinated the “Outdoor Club” and took his students cross-country skiing and hiking during weekend outings in the Cascades to introduce city kids to the beautiful Pacific Northwest geography.

She has worked for district for 20 + years and has performed a variety of classified jobs. She drove a school bus for four years and in-between routes was a substitute para-educator working playground duty, in classrooms, in kitchens and as a one-on-one support staff member. She also operated the in-school suspension room at Walla Walla High School for three years. During the summers, she would fill-in for the technology secretary and eventually moved to the technology department as the Library Media Secretary, sending video tapes and other visual resources to schools. When the library collection was disbanded as VCR’s were being phased out, she joined the staff at Berney in 2008-09 and has been happily there ever since.

Lisa believes in helping support the community, she and her husband have been foster parents twice in recent years. She has always volunteered to be part of the PTA at her children’s schools and is currently serving on the Dixie school board. Lisa is a strong believer in Positive Behavioral Interventions and Supports training. She enjoys watching students who have struggled in school get the support they need to develop into competent adults. She says it is a wonderful reward for holding consistent expectations each day and gives her a great sense of pride and accomplishment knowing she played a small part in student growth.

Outside of work, her favorite place to be is in the kitchen trying new things. She loves to garden, read and craft and says any ocean beach is her ultimate happy place. Lisa and her husband blended their families 20 years ago. They have five children with four of them living out of state. She looks forward to playing with five adorable grandchildren when they travel.