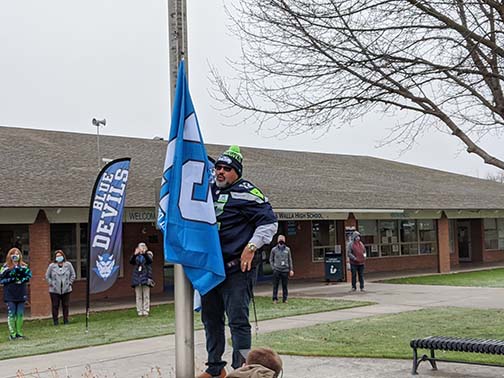 Walla Walla High School Intervention Specialist Melito Ramirez, who was recently named the 2020 Washington Classified School Employee of the Year, has been invited by the Seattle Seahawks to virtually raise the “12th Man Flag” for Sunday’s game against the New York Giants. The Seahawks are honoring local heroes through this program.

Ramirez raised the 12th Man Flag in front of Walla Walla High School. Staff from the school’s 21st Century Afterschool program filmed Ramirez as he raised the flag. All of the raw video footage is being sent to the Seattle Seahawks’ video team for production. The video will be posted on the Seahawks official website Friday.

The Seahawks gave Ramirez a special 12th Man jersey with his name on it. He also gets to keep the flag and other tokens of appreciation from the Seahawks.

Ramirez has dedicated the past four decades working professionally to support students and families in the Walla Walla valley and the past 12 years as an Intervention Specialist for Walla Walla Public Schools. Ramirez will continue on to the national competition being the first Washington Classified School Employee of the Year to compete for the Recognizing Inspirational School Employees (RISE) award, administered by the U.S. Department of Education.