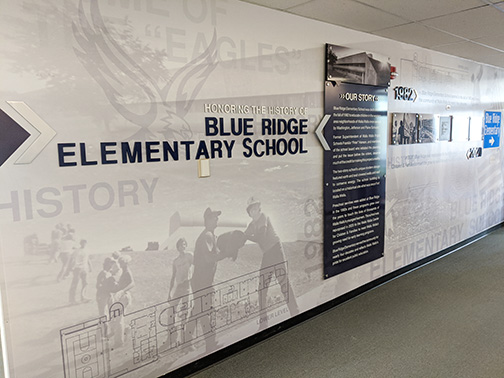 The district developed a beautiful wall display in the main hallway of the former Blue Ridge Elementary to honor the school’s four-decade legacy. The display features photos of the school during construction in 1981-82. It features a narrative of the school’s history and significance in the Walla Walla Valley.

The city road sign formerly mounted on 9th Street is incorporated in the design as well. The “Faces of Blue Ridge,” featured originally on the walls of the school’s main entrance, were also captured in the design to preserve this important piece of Walla Walla’s history.

Special thanks to local businesses Wilson Design Company and Integrity Design for collaborating on the project.