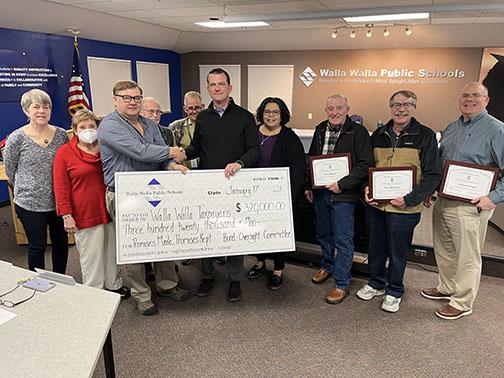 As the district’s historic 2018 bond program comes to a close following more than three years of campus renovation improvements, approximately $320,000 of unallocated bond dollars is set to be refunded back, further reducing tax rates for local taxpayers. This critical and final step of the bond program completes the last of the “promises made promises kept” list of assurances, where all remaining local and state match money left over would be returned and not reallocated towards other non-voter approved projects.

“We made a promise to voters that if there were any unspent dollars remaining after all the voter-approved improvements were complete, they would be returned to taxpayers,” said Superintendent Dr. Wade Smith. “We delivered on every project advertised, and our citizen-led Bond Oversight Committee carefully stewarded community resources throughout the entire construction program.” Local bond tax rates are set to fall to an historic low of 91 cents per thousand assessed, 32 cents cheaper than what was advertised when the bond passed.”

Superintendent Smith praised the Bond Oversight Committee for carefully monitoring the delivery of the bond program. They reviewed financial statements, project scope, construction documents and bid solicitations to ensure that bond dollars were only being spent on projects approved by voters. The committee also supervised the advertisement and selection of the projects’ general contractors, architects, vendors and consultants. Their oversight helped to secure over 50 local contractors and suppliers for bond project work, resulting in tens of millions of dollars’ worth of improvements awarded to local Walla Walla companies.

“Despite operating during a global pandemic with unprecedented supply chain issues and escalating costs, we were able to complete all the projects on time and under budget,” said Superintendent Smith. “We are so thankful to the community for their support and confidence through this investment in our children and their futures.”