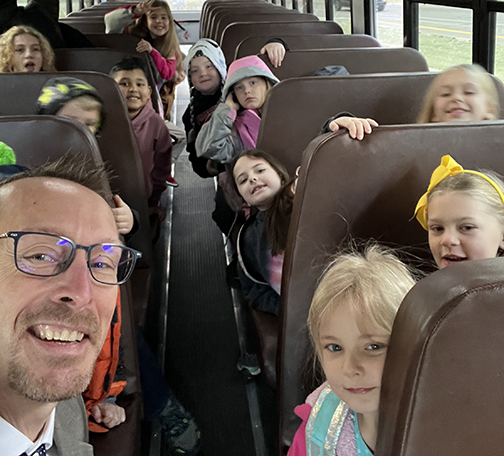 Recently I had the pleasure of spending two hours riding shotgun with Robb Lincoln, one of over 30 dedicated bus drivers who safely transport over 2,200 students every single day across Walla Walla Public School boundaries. As I arrived at the transportation facility just before 7am, the office was already bustling with activity. Drivers, mechanics and office support were well underway with their morning rituals - warming up busses, filling up their coffee cups, performing safety inspections and checking for any route updates or schedule changes that may have come their way since putting their bus to bed the night before.

While one would think as superintendent my presence would command some semblance of authority at the bus depot, I quickly came to respect the fact I was clearly outside my area of expertise and influence. Like a kindergarten student eagerly anticipating their first day of school, your superintendent quickly realized his place and patiently waited for his que in the back as employees scurried about with intentionality.

Then came my sign. In walked Driver Robb, donning a bright orange safety vest and clipboard of the day’s route guide. “Let’s roll,” he announced. And off we went, him taking his seat at the helm and me taking my perch in the first bus row opposite his. Again, think kindergartener.

Over the next two hours, as we proceeded through Route 13’s scheduled stops, I was filled with a sense of pride and admiration that can only be appreciated when you see it in real-time. The care and attention that Driver Robb puts forth every day is nothing less than astonishing, while he and his colleagues traverse over 10,000 miles weekly transporting our children.

Robb’s first task of the day was to pick up elementary students. As children entered the bus, bundled head to toe in puffy coats and cartoon-themed backpacks, I witnessed in amazement a bus driver who greeted every student by name and with a smile. Some received fist bumps. For some, he asked how their morning was and they responded with a thumbs up or thumbs sideways. For others, he asked if older brother or sister was feeling any better (they were clearly sick the day before and still not joining us).

As we traveled along the picturesque views of the Blues that backdrop Route 13’s southern border I quickly came to appreciate that what I was witnessing was no show being put on for the superintendent. Rather, it was nothing less than an authentic experience of a bus driver who truly loves kids, and students who equally adore their driver. This shouldn’t have surprised me. My own two children, before they graduated from WaHi, spoke with reverence about their Route 13 driver, Leonard Adams, who preceded Robb. He was a gentle man who loved his country music, picking them up and dropping them off daily at Garrison and later the high school. My girls were sad to learn that Leonard recently retired. At age 82, he spent nearly three decades behind the wheel for the district transporting generations of students. I also recall how they often talked fondly of Driver Juan who regularly transported them on out-of-town soccer trips and who they considered one of their most loyal and fiercest of fans.

As I visited with Robb along the route I gained a new level of appreciation for him and his driver colleagues. A true cross section of our community, he shared that some are retired first responders, while others are retired teachers. Some are young mothers, others harvest during the summer, and we even have a professional gemologist who drives for us. Robb himself, a graduate from the U of W (Coug fans, don’t hold that against him), drove tour bus for some time up in Alaska, is also our district CDL trainer, and has been safely transporting our valley’s children for the last 13 years.

As we celebrate American Education Week this week, November 13 -19, let us take time to honor and thank all who dedicate their lives in support of our students. While we are blessed with incredible teachers, administrators, front office staff, cooks, custodians, and so many more, let us also take time to thank our 40 bus drivers, mechanics and support staff who play an essential role as we aspire to achieve our vision of “Developing Washington’s Most Sought-After Graduates.”