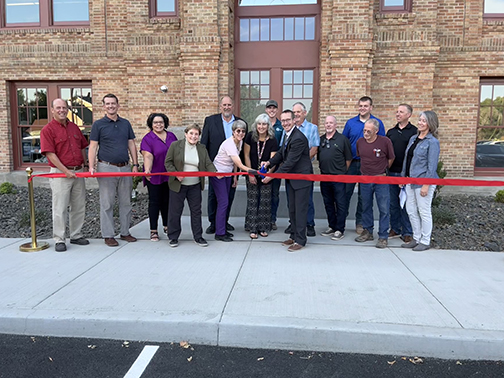 Hundreds of former students, staff and community supporters visited Lincoln High School Wednesday, Oct. 5 to celebrate with the school district during the official Ribbon Cutting ceremony marking the final steps of the historic bond-funded project. Guests marveled at improvements of the 95-year-old school as they toured the campus to see the updated classrooms and renovated facilities made possible thanks to the successful November 2018 bond measure overwhelmingly approved by voters with a 73 percent yes vote.

Superintendent Dr. Wade Smith served as Master of Ceremonies during the event. He shared the history of the school which opened in 1927. Superintendent Smith summarized the improvements made on campus, thanked everyone involved in getting the project approved and completed, and acknowledged the nearly 50 local contractors and vendors who worked on various bond-funded projects. Improvements at Lincoln High School include a new entry and black box theater addition, renovated classrooms, modern heating and cooling system and elevator for ADA accessibility. The project also includes parking lot improvements, enhanced safety and security features and energy efficiency improvements.

Superintendent Smith also introduced former Principal Jim Sporleder to the podium to share stories about his tenure as principal of Lincoln High School from 2007 to 2014 as part of his 32 year career in education. Mr. Sporleder was featured in the documentary Paper Tigers released by KPJR Films in 2015. Paper Tigers helped shed light on how Adverse Childhood Experiences impact academic achievement and the need for more social and emotional support systems in schools. Sporleder said he is proud of his time at Lincoln High School and is thrilled to see the improvements to the school.

The formal program ended with the ribbon cutting, marking the official opening of the newly renovated and expanded facility. More than 200 people attended the ceremony and toured the school. Thanks to everyone for your support in making this amazing project come true.