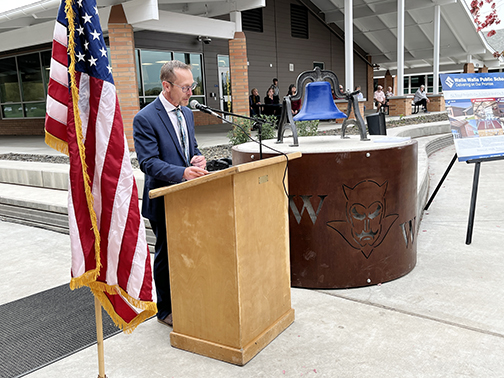 Below is the speech made by Superintendent Dr. Wade Smith during the historic Walla Walla High School Ribbon Cutting Celebration Sept. 21, 2022.

Before we take the opportunity to marvel at the improvements that have been made to this glorious campus, let us first take time to appreciate the people, accomplishments, successes and even some obstacles overcome, that have led us to this day of celebration.

It began not 6 years ago when we started planning for these improvements, but over six decades ago when this beautiful campus came to be. It was not without controversy however. A drawn out and highly contentious decision that went all the way to the Washington Supreme Court unfolded over whether bond funds should be used to expand the old high school on what was an undersized Park Street location, or build a new larger school on a different site. Following was the court’s approval, and a board election in 1960 that flipped the board vote in favor of a different high school site, which helped pave the way for this beloved campus.

Many of you may not know, but 5 different sites were under consideration for the new high school, and on May 5, 1961, for the sum total of $73,750, the district purchased the 35 acre parcel we stand on today. They had everything they needed to begin, the property and an approved bond measure. Unfortunately, when they opened the bids to construct the new campus, they were 35% over budget to complete the project. A second bond was actually needed to see the high school construction through. While the first attempt didn’t pass, our community came through on the second try, providing just enough funds to finish construction of the “new Wa-Hi.”

Set to be complete when students returned from winter break in January of 1964, unfortunately they ran into a few snags; the commons building was not quite complete so students were forced to eat sack lunches in locker lobbies for a couple of months, no lawns were yet planted and walkways and parking lots were still gravel. But these setbacks didn’t dim the shine of the community’s accomplishment. During the ribbon cutting ceremony Dr. Odegaard, president of the University of Washington, gave the featured address praising Walla Walla for their dedication. He said, and I quote, "To see the buildings is to see the thought, imagination and inspiration that went into them. This is a gratifying episode in local history."

Sixty years later, standing on the very same campus, these same words ring as true today as they did back then. To see these buildings before you, nearly 60 years later, is to see the thought, imagination and inspiration that went into them. Just as it was back in 1964, today marks another gratifying episode in our local history.

As Mark Twain noted, “history doesn’t repeat itself, but it often rhymes.” Just like in the early 60’s, the journey to see this current project through was wrought with some challenges. Back in 2006 a bond measure was presented to our community that recommended the demolition of most of the current campus facilities; to be replaced with a single, two story building. That proposal did not resonate with voters. In 2013 a second attempt at a hybrid approach was made which also failed to garner sufficient support. And a little over one year later a third, scaled back attempt at a stand-alone science building was considered. It yielded even fewer votes.

Fast forward to 2016. The Walla Walla School Board knew how important it was to see this campus improved for its students and faculty. They had to get this one right and they decided to take a tempered approach, allowing their newly hired superintendent to spend an entire year engaging and listening to staff, parents, students and community members. This time was critical in helping better understand our community sentiment.

As I engaged with hundreds of stakeholders, three themes became evident that were critical to address. First, was trust. It was clear that we lost some of it during the 2007 Edison Bond. We needed to regain it. Second was transparency. We had to improve community oversight and accountability. And finally, embracing our pride in our history. It didn’t take me long to understand that our school and greater community is steeped in tradition. We are one of the state’s oldest school districts, dating back to 1857. What we had accomplished with renovations, like those at Green Park and Sharpstein, are still a source of great pride decades later as we preserved both beloved campuses. To highlight this powerful sentiment is best understood by simply conversing with anyone who has been in Walla Walla for some time. Much of our community still refers to this as the “new WaHi,” even though it was built at a time when some of our current students’ grandparents had yet to be born. It became crystal clear that preserving this beloved asset was essential.

Our journey to success began with the establishment of a Community Facilities Task Force. Led by Graduate of Distinction Paul Schneidmiller and 19 others, this group spent the better part of a year in their efforts. They commissioned 13 different studies; from an outside safety and security audit to a comprehensive building conditions analysis. They engaged in multiple community surveys, in site evaluations, and with construction experts. And in April of 2018, after heeding input from the community, they wisely recommended a no-tax increase bond measure, rather than one that would have increased rates. And unlike their predecessors, their approach focused on preservation and renovation over demolition. Their proposal also addressed other critical needs across the district, and garnered a near dollar for dollar match from Olympia, netting over $120M in needed improvements, all the while keeping tax rates one of the lowest in the region.

One month later our School Board unanimously accepted the committee’s recommendation to place the measure on the November 2018 ballot. This decision then kicked off the district’s educational efforts that included countless presentations and information sessions led by Board Members, Communication’s Director Higgins, and staff. We also had the honor of being represented by lifelong Walla Walla resident and former WaHi principal Dick Neher who, on a blistering hot summer day in 2018, narrated an all-important bond video that would be viewed by thousands across our community.

The Citizen’s For Schools community-led campaign included scores of parents, stakeholders and students who were deeply engaged in advocacy efforts. Led by co-chairs Susan Prudente and Jim Hayner, other supporters like Derek Sarley, Jolene Riggs, Ruth Ladderud, Karri Bruce, Kurt and Barbara Hoffman, Steve Owens, Emma Case, and countless more, joined the effort. From a sea of Vote Yes signs, shirts, letters and door knocking, their efforts helped lead us to one of the highest “yes” votes in the history of WWPS at 73%.

When the bond passed, a group of ten dedicated community members, led by Chair Scott Morasch, convened dozens of times to serve as the district’s Community Bond Oversight Committee. From onsite inspections, to supervising the selection of contractors, to ensuring every dollar was spent only on citizen approved projects, they helped steward the construction forward despite unprecedented challenges never anticipated.

Who would have thought when the bond passed in 2018 that such obstacles loomed? From a global pandemic, to skyrocketing inflation costs for goods and services, to unprecedented worldwide supply chain shortages, it is a miracle that we are able to stand here today and say, “we did it.” We delivered on every single promise made in the 2018 campaign. This could not have been done without our incredible team we have assembled here. Rylan Oakland and crew from Jackson Contractor Group. Kevin Cole and his consultants from Architects West. Heath Gardner and team from Weneha Group. Facilities Director Mike Kay and former principal Ron Higgins. And finally, to the 50 local contractors and vendors who played an integral role in seeing this project through. From Allen Gillespie and his roofing crew, to Mark Houk and his incredible masonry work, to family-owned Cutting Edge Plumbing, to John Sasser at Integrity Design, all of our local contractors and suppliers have been extraordinary.

Over the coming weeks our team will put the final touches on the “new-new WaHi” campus as we finish up parking lots, landscaping, locker rooms, the renovated greenhouse and other small items. Despite a few odds and ends to wrap up, you will be amazed at our collective accomplishments. We have been able to do what so many had hoped for many years – to honor this glorious campus, with its flowing creek, brick façade and iconic architecture, all while bringing it up to 21st century learning, safety and efficiency standards.

What our entire community has accomplished together is helping to guarantee that this campus will continue to develop Washington’s Most Sought After Graduates for the next 60 years.