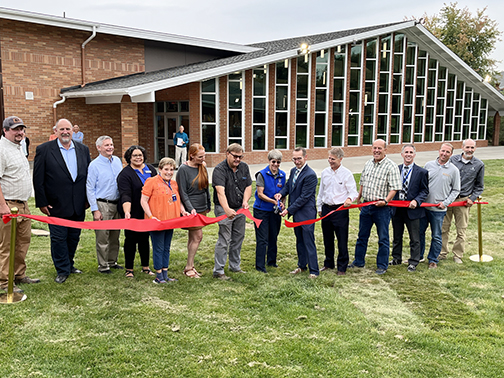 History was made on the campus of Walla Walla High School on September 21 as hundreds of district supporters and alumni flocked to the school to celebrate during the official ribbon cutting ceremony marking the final steps of the campus-wide bond-funded renovation. Guests also toured the campus to see the updated classrooms and renovated facilities made possible thanks to the successful November 2018 bond measure overwhelmingly approved by voters with a 73 percent yes vote.

School Board President Ruth Ladderud, a graduate of Walla Walla High School, welcomed everyone to the ceremony and thanked the community for its support. Superintendent Dr. Wade Smith served as Master of Ceremonies during the event. He shared the dynamic history surrounding the relocation of the original 1916 Walla Walla High School on Park St. to its current location in the early 1960s.

Superintendent Smith summarized the improvements made on campus, thanked everyone involved in getting the project approved and completed, and acknowledged the nearly 50 local contractors and vendors who worked on the project. Superintendent Smith also announced the naming of the new student plaza outside of the Commons as the Dick Neher Student Plaza after the legendary principal who served from 1970 to 1990. Mr. Neher passed away in 2018, just three weeks following the successful bond. He narrated an informational video, recorded in July of 2018, which was viewed by thousands, serving as an anchor to the measure’s communications platform. A special bronze plaque affixed to a sizable rock in the plaza notes Mr. Neher’s impact on the campus and community.

A new Dick Neher Legacy Scholarship was also announced which will provide funding for future graduates to pursue higher education. The scholarship will get its seed money from one-of-a-kind Challenge Coins with Mr. Neher’s photo and logo of Walla Walla High School. Only 100 are being made and are available through the Blue Mountain Community Foundation for $1000. Donors will also get their names included on a special plaque to be mounted in the newly renovated entry of the school.

Mr. Neher’s son Mike shared a few words about his father on behalf of the family. He noted his father’s belief that all students can learn was his greatest trait as principal. Mike Neher said the naming of the student plaza would have been his father’s greatest honor.

The formal program ended with the ribbon cutting marking the official opening of the newly renovated and expanded facility. Thanks to everyone for your support in making this amazing project come true.