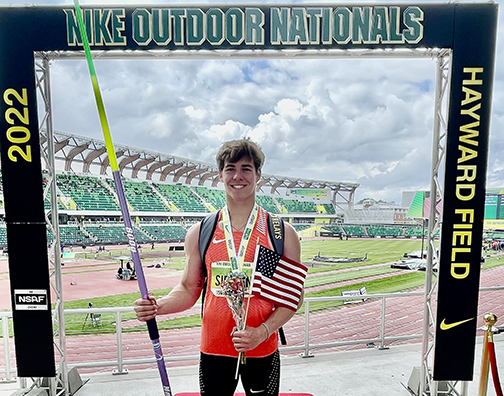 Walla Walla High School Class of 2022 graduate Dash Sirmon won the National Championship in javelin at the Nike Outdoor Nationals in Eugene, Or. Sirmon had a throw of 221’ 1” to win the title. This effort breaks Sirmon’s school record he set earlier this school year. He also holds the Washington state record in this event. Sirmon also finished fourth in the long jump with a jump just under 24 feet.

“We are so proud of him for his work ethic, attention to detail and the leader and tremendous teammate he has been,” said Walla Walla High School Track and Field Coach Eric Hisaw. “Dash let loose with the greatest throw of his life. And with that one throw, Dash became National Champion for 2022.”