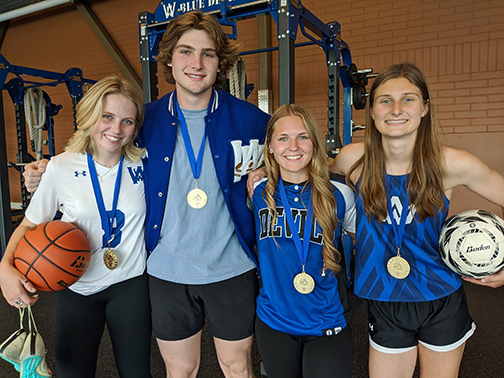 Senior Athletic Department Awards
The following awards were earned by senior athletes in the class of 2022 and announced at the commencement ceremony on June 10.

Brown Trophy
The Brown Trophy is presented to the Senior boy who has participated in the athletic program and has been outstanding in sportsmanship, school citizenship, and the spirit in which he trains. It is voted on by the head coaches of all boys’ sports, the Principal, and the Athletic Director.

This year’s Brown Trophy winner is Dash Sirmon. Dash has participated in Football, Basketball, and Track. Throwing the javelin as a freshman he placed 6th in the state track meet and was the U-16 national champion. As a junior, he was MCC champion and first team in both the pole vault and javelin. This spring he was named MCC field athlete of the year, earned league and district championships in the javelin and long jump, two events in which he set a school record. At the state track meet, he led the Boy’s track team to the state championship while winning the long jump and javelin, and placing 6th in the discus.

Lawrence Jacky Award
The Lawrence Jacky Award is presented to the senior who has contributed to the development of athletics at Wa-Hi while showing outstanding citizenship and sportsmanship in all phases of school life.
Selection is made by a vote of the faculty here at Wa-Hi.

The winner of this year’s Lawrence Jacky Award is Tallulah Sickles. Talullah has participated in slowpitch and fastpitch softball. In slowpitch softball she was first team MCC as an outfielder and helped the team to their first state tournament in school history. She is a two-time conference player of the year in MCC fastpitch softball while leading the team consecutive conference championships. She is also a two-time, first-team pitcher who led the Blue Devils to a second place finish at the 3A state softball tournament this Spring. She will attend Lewis and Clark College in Portland to continue her career.

Lehnen Trophy
The Lehnen Trophy is presented to the Senior Girl who has participated in the athletic program and has been outstanding in sportsmanship, school citizenship, and the spirit in which she trains. It is voted on by the head coaches of all girls’ sports, the Principal, and the Athletic Director.

This year’s winner of the Lehnen Trophy is Kylie Kemp. Kylie has earned 12 varsity letters in her four years as a Blue Devil. She has excelled in wrestling and slowpitch and fastpitch softball. She has received 7 all-Mid-Columbia Conference awards for her efforts. Two on the wrestling mat and five on the softball diamond. She earned at least one first team award in each of her three sports. As a senior she propelled her teams to three state tournaments which included a 2nd place finish in fastpitch softball and a the first appearance for WWHS in the state slow-pitch tournament.

Wa-Hi Junior selected to WIAA Leadership Team
Soon to be Junior Turner Van Slyke has been chosen to the Leadership through Education, Activities, and Personal Development (LEAP) committee for the Washington Interscholastic Activities Association. LEAP is a student group organized by the WIAA and is involved with WIAA events, meetings, and community projects. LEAP committee members serve to be the voice of over 225,000 student-participants supported by the WIAA. Turner was one of 8 students selected across the state in the class of 2024 to serve a two-year term. He was chosen based on his application, letters of recommendation, written questionnaires, and video profile. Congratulations to Turner.