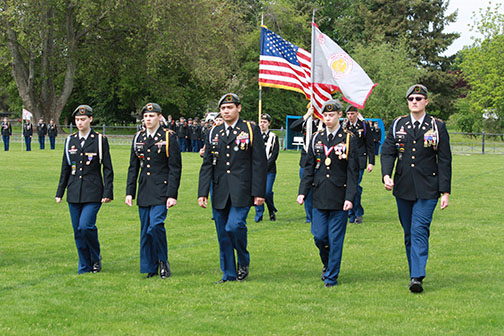 The cadets of the Walla Walla High School Junior Reserve Officer Training Corps held their annual review and end of year pass in review parade May 25 at the soccer field off Reser Road.

The battalion change of command highlighted the day's events. Newly-promoted cadet Lt. Col. Kaden Kerr was installed as the battalion commander, effective immediately. He received the Blue Devil Battalion colors from Command Sgt. Maj. Tony Marrero, Senior Army Instructor. The outgoing BC, c/Lt. Col. Maxwell Wooster has been selected for an Army ROTC scholarship and will be a cadet at the University of Idaho in Moscow.

The assembled battalion was reviewed by retired Army CSM Terry Atchison. The cadets then held a formal "pass in review" in a final parade led by the graduating 2022 class.

Numerous team and individual awards were presented during the concluding ceremonies. Among the presenters was Wa-Hi Principal Ron Higgins, who is retiring from public education at the end of this academic year. He has been a longtime champion for the program which molds future leaders and helps cadets learn to be better citizens.