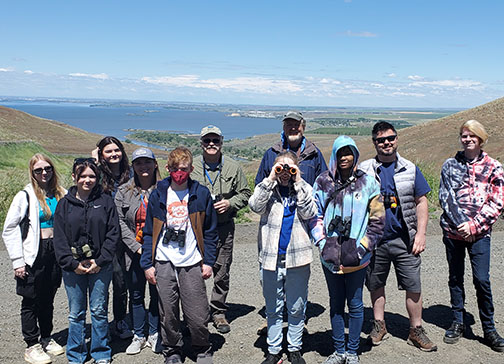 “Our group spent the morning exploring the trails around the Millet Pond in search of birds and listening to Mike’s amazing stories and natural history lessons,” said Walla Walla Online teacher Mary Burt. “During the adventure students witnessed an American Kestrel eating a mouse and a pair of Bald Eagles who had at least one chick peeking out of the nest.”

Some birds, like the Yellow Warbler and Bullock’s Oriole were more often heard singing than seen, but by the end of the morning most students got a glimpse of their brightly colored feathers, according to Burt.

“At one point Mike stopped everyone along the trail to point out a Brown-headed Cowbird and explained how this bird follows other bird species around in search of their nests where it will lay its egg.” said Burt. “The female cowbird is even able to make her egg look similar to the other eggs in the nest. When the cowbird egg hatches, the poor unsuspecting parents are tricked into raising a chick that often grows much larger than themselves.”

On our way back to Walla Walla, Mr. Denny took the group up Hatch Grade Road for a great view of the Walla Walla River delta where it empties into the Columbia River. At this stop the group found Lark Sparrows and listened to singing Western Meadowlarks.

“During this Walla Walla Online and Opportunity Program collaborative field trip, students made some new friends and added 25 bird species to their life lists,” said Burt. “It was simply wonderful to spend some time outdoors exploring together.”