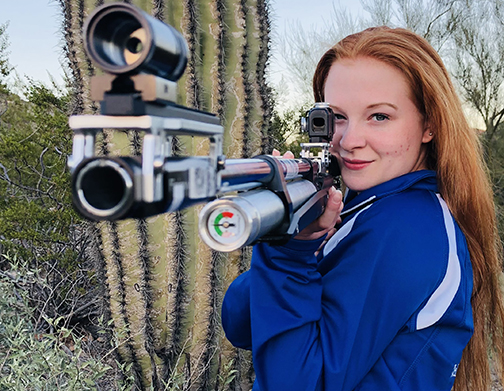 The Phoenix match is the second of three matches that pitted the top Army JROTC shooters against each other vying for honors and an invitation to the All Service JROTC National Championship in Camp Perry, Ohio this March. Over 400 high school JROTC programs compete in local qualifying matches to gain an invitation to the event. The team, captained this year by Hanson received invitations for both the precision class and sporter class rifle teams.

The match consisted of 2 days of Olympic-Style air rifle shooting with competitors shooting 20 record shots in each of three firing positions; prone, standing and kneeling.

The third leg of the Army JROTC National Match will be held next weekend in Ohio. The results of this match will determine final national placement for Army JROTC and invitations for shooters to compete in the All-Service JROTC Rifle Championships this March in Camp Perry.

Hanson’s placement as Army western champion will most likely earn her a place as an individual, with Scott in consideration as well.