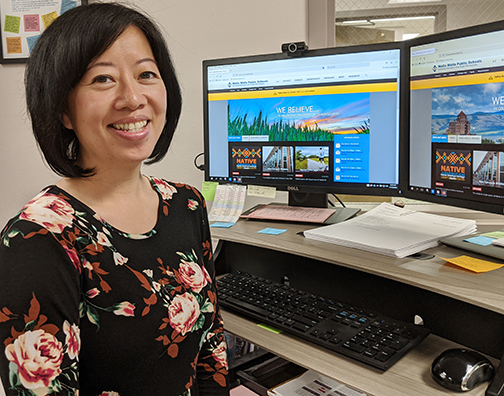 Human Resources Administrative Assistant Judy Hui was born in Hong Kong but moved to the United States with her parents and older brother when she was two and a half. She was a Berney Bulldog, Pioneer 49er and a Walla Walla Blue Devil. After graduating from Wa-Hi, Judy attended University of Washington and double-majored in Spanish and Business Administration with a focus on marketing.

After graduating from UW, she lived in Asia from 2006 - 2016. The first two years were in Taiwan. She traveled, and took mandarin courses at National Taiwan Normal University. She taught English to children for a half year at HESS International Educational Group. The next eight years she lived in Malaysia where she and her late husband operated a small trading business. They imported a line of Taiwanese professional salon products distributed throughout Malaysia. She had a hands-on role in this small business of less than 10 employees. Judy was responsible with tasks including inventory management, shipping logistics, bookkeeping, storekeeping, delivering and debt collecting. She said it was interesting, but not her passion.

Judy says she can’t pinpoint one single educator as being the most influential because she feels each teacher has helped shape her in a different way. She loves being colleagues with some of her former teachers.

Prior to COVID, Judy liked volunteering at the kids’ schools when they had afterschool activities. Her favorite experience was manning the cotton candy machine one year at the Berney carnival and seeing all those hungry little eyes waiting to get to the front of the line. She hopes these activities will resume soon.

Judy started working in the school district because she wanted a similar schedule with her children. After meeting her colleagues and witnessing the drive they have for improving the education system, she became hooked. Judy loves being a part of the support system for our staff and administrators.

Judy has two children. They were both born in Taiwan. Cliff is in 5th grade at Berney, and Maddy is in 3rd grade at Edison. Judy says it takes a village to raise kids, and her parents are her village. They are always there helping with pick-ups, drop-offs, appointments and more.

Judy enjoys the outdoors, especially taking her children on hikes. She also enjoys running, playing board games, and catching up with friends over a nice cup of coffee.