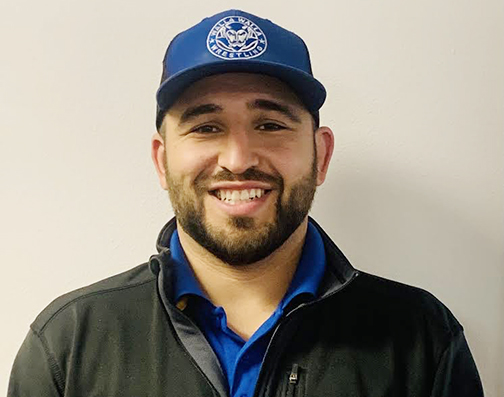 Facilities and Operations Trades Assistant David Marquez was born in Los Angeles, but he was raised in Walla Walla. He graduated from Walla Walla High School in 2009 where he had a passion for wrestling. He considers former wrestling coach Clayton Hudiburg as his most influential educator. David says Mr. Hudiburg has been a positive role model in his life since his high school days on the mat. Clayton was also his freshman science teacher. He says he has been lucky to have been able to coach alongside him as an adult and maintain a close relationship. He still goes to him anytime he needs help or advice. David says Clayton taught him to look at things objectively and that what you get in life, is what you put in.

As a trades assistant, David performs grounds maintenance, assists carpenters, coordinates hauling projects and makes special deliveries. He is also the coordinator for snow removal. He has a pesticide public operator license, is a certified playground maintenance technician and is currently pursuing his arborist certification. David enjoys cooking and is occasionally the district’s BBQ pitmaster for special events.

Marquez says he enjoys giving back to the community and working with kids. He started his career in the district as a para educator for two years before transitioning to Facilities & Operations. He enjoyed working in a school setting but the opportunity to work outside better fit his interests. David coached wrestling at Wa-Hi for eight years as an assistant boys coach and head girls coach. In 2017 he was voted Mid-Columbia Conference Assistant Coach of the Year. Currently he coaches Brazilian Jiu Jitsu at Connection Rio Jiu Jitsu Academy in College Place. He is actively training and competing in Brazilian Jiu Jitsu and has won tournaments around the Northwest. He has been ranked as high as #18 in the world in his weight and age division and competed at the Master (ages 30+) World Championships in Las Vegas earlier this month where he received a bronze medal in a highly competitive field of 74. David’s fiancé Michelle works at Providence St. Mary Medical Center. His daughter Madelyn is a 2nd grader at Edison and his son JJ is in preschool at the Walla Walla Center for Children and Families.