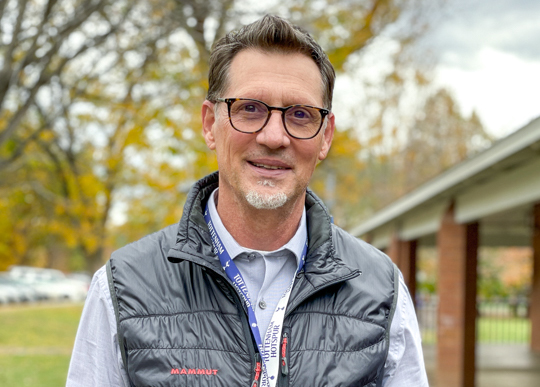 Walla Walla High School Digital Photography teacher Keven Peck was born in Lincoln, NE. His parents grew up in the small SE Nebraska city of Falls City. They relocated their family to Spokane, WA when Keven was a child and he graduated from Shadle Park High School in 1981. He stayed in Spokane for his undergraduate studies earning a bachelor’s degree at Whitworth University. Keven received his teaching degree from Western Washington University and has a master’s in curriculum and instruction from Northwest Nazarene University.

Keven says school was always important to him and he considers two former teachers as the most influential educators in his life. Claudia Halseth was his high school art teacher. He says she was honest and fair, and understood sometimes kids need consequences and sometimes they need grace. Spike Grosvenor was a professor and coach figure at Whitworth University and a person Keven says truly believed in him. He also told Keven what he needed to hear, and not always what he wanted to hear. They maintained a friendship for many years until Spike’s passing. This relationship positively impacted his life and the lives of many others.

Keven says he decided to go into teaching and coaching because it allows him to connect with all types of learners and positively impact their academic and athletic journeys. He was recruited to play soccer at Whitworth University. Over time, he found people cared as much or more about what he could do in the classroom than they did about what he did on a soccer pitch. Keven says the students and professors he was surrounded by inspired him to be better academically. This support had a profound impact on Keven.

Keven and is wife Allison have two adult children, Presley (m. Kyle Foust) and Gerrod, and a grandson Ryder. Presley works at True Salon and manages their coffee stand. Gerrod is working on his master’s in music performance at the University of Oregon. Keven and Allison own a coffee stand - Walla Walla Daily Grind. Allison works at Dama Wines and manages the coffee stand as well. Keven enjoys traveling and is always equipped with his camera. He stays busy, but says when life gives him a chance to slow down he likes to tinker in his backyard space.