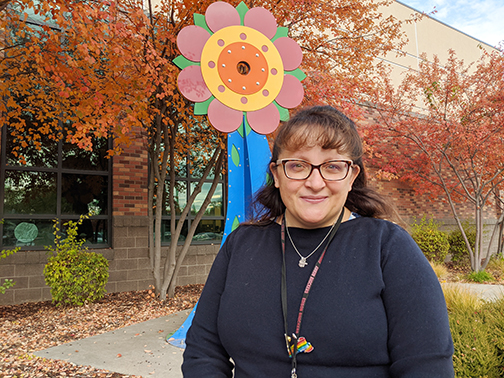 October is an opportunity to show your appreciation for Walla Walla Public Schools’ principals in celebration of National Principal Appreciation Month. The school district recognizes the essential role principals play in providing opportunities for students to realize their potential and follow their dreams. This month the district will spotlight its principals as a way of thanking them for their service.

Edison Elementary Principal Jenny Foster was born in Oregon City, Oregon and graduated from Central High School in Independence, OR. She was a self-described farm girl growing up on a 500-acre grass seed farm her grandfather purchased just 30 miles down the road from Salem. Money was tight for the family and Jenny realized at a young-age the importance of doing her part. She learned to drive a truck at age 10 and operated an assortment of farm equipment during her teens. Despite her blue-collar roots, Jenny knew by age eight she wanted to be teacher.

During her junior year of high school she applied to be an exchange student through a program sponsored by the local Rotary Club. Jenny was accepted into the program and soon found herself on a plane to Bogota, Colombia. She attended a K-12 all girls Catholic school in Colombia. She had two years of French in high school prior to her trip, but didn’t know any Spanish when she arrived on foreign soil. She spent the first few months of her stay in second grade learning Spanish, but transitioned to the junior classes within four months of her exchange. By this time she was fully fluent in Spanish.

Although she was only 16, Jenny soon realized she wanted to teach high school Spanish. She spent an entire year in South America as an exchange student fully immersed in the language and culture. All of her classes, which included advanced math and science, were taught entirely in Spanish. She would travel to beautiful beaches in the area for vacations and spoke exclusively in Spanish. Not only did her Spanish language skills greatly improve, Jenny matured, learned to juggle more responsibilities and was determined more than ever to find her path to teaching.

Throughout her 33 years in education, Jenny has continued to live and travel in other Spanish-speaking countries such as Mexico, Spain, Costa Rica, and Peru. These experiences have allowed her to grow as a world citizen. She strives to use her experiences to make connections with students about the importance of language and cultures. Although she has not made it back to Colombia to see her former school and surroundings, she has it on her to do list.

Jenny is a lifelong learner with a bachelor’s degree in Spanish education from Oregon State University, master’s degree from Western Oregon University and principal certificate from the University of Washington. Her most influential educator while growing up was her high school English teacher Mr. Jamison. He was the first teacher to have high expectations of every student, build trust and respect through positive connections with students. She recalls his teaching style was fun and meaningful. Mr. Jamison loved the legendary band the Rolling Stones and would use their song lyrics to help students learn metaphors, similes and other forms of grammar. Jenny enjoyed these lessons so much she adopted the same strategies in her teaching years later.

Jenny has vast professional experience including 24 years in the classroom teaching high school Spanish in schools across Oregon and Washington. She also taught college-level Spanish at Oregon State University for five years before transitioning to K-12 administration as an Associate Principal at Mercer Island High School for two years

Now in her second year as a principal of Edison, Walla Walla Public Schools’ highly touted wall-to-wall Dual Language school, Jenny has the opportunity each day to show her love, respect and passion for supporting students, their families and teaching staff. She continues to grow in making her school a place where everyone feels valued, heard and a sense of belonging. Jenny’s Spanish skills are put to use daily and her rich understanding and respect of different cultures is modeled with staff and students alike.

Outside of work, Jenny loves cooking, traveling, gardening and spending time with family. She and her husband Robert have three grown children - Jackson (US Army 2nd Lt. stationed at Joint Base Lewis-McChord), Henry (firefighter in Richland) and Lily (studying elementary education at WSU), and one granddaughter.

Here is what staff and students are saying about Jenny:
"I appreciate Mrs. Foster so much! Her energy is contagious and her passion for her team and the kids is so motivating. She is someone I look up to and I'm so grateful to have her as my boss/mentor/friend! Gracias por todo y sigue como eres!" - Mrs. Estrada

"The lengths that Mrs. Foster goes to for students, staff, and families are immeasurable. She will stop whatever she is doing to help anyone in need. There isn’t a job that she isn’t willing to take on in the building. From crossing duty to covering in the office and answering phones, she never hesitates to jump in and help wherever needed. I admire her dedication to her work and everything she does to help the school run successfully. I am so thankful for Mrs. Foster and all that she does!" - Mrs. Michels, secretary

"Mrs. Foster is the best principal ever." - Azael Garduno, student

"You're the best! You're nice and kind!" - Maily Crisostomo, student

"She's the best principal because she always helps the students that need help!" - Maddy Chang, student

"She's the best principal because she takes care of us." - Daniel Pedroza, student

Edison Elementary Principal Jenny Foster had the courage to leave her home at age 16 and travel to a foreign country to learn about new cultures and language. Jenny’s experiences learning a new language helps her relate with the students at Edison in the dual language program. She gives them hope, helps them overcome their fears and challenges them to persevere. Thank you Principal Jenny Foster for your leadership ensuring Edison students have the support and systems in place to become bilingual and biliterate.