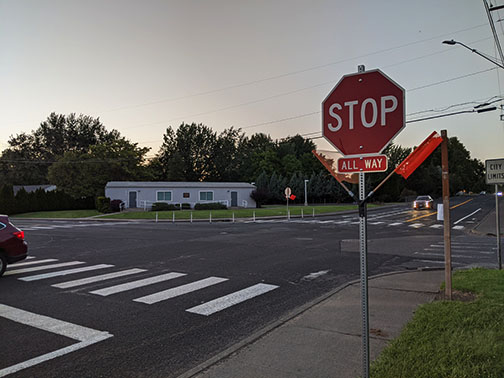 The city of Walla Walla, Walla Walla County and Walla Walla Public Schools are working together to improve the intersection at Fern Avenue and Abbott Road. The current configuration is extremely wide, resulting in long pedestrian crossing distances and uncertainty for motorists. In addition, only those traveling on Abbott Road are currently required to stop. These conditions create a safety hazard for anyone traveling through the intersection.

The city, county, and school district pooled funds to hire a traffic engineer to recommend solutions. The traffic analysis considered several options, including a compact roundabout, but the recommended long-term solution for the intersection is a four-way stop. Improvements recommended with the change in traffic control include curb extensions to allow for better visibility and shorter crossings for pedestrians; improved street lighting; Americans with Disabilities Act (ADA)-compliant pedestrian ramps; and bicycle lanes. The partnership project plans to seek grant funding for the improvements in 2022, with construction targeted in 2024.

In the short term, the city made interim changes to the intersection to improve safety prior to the upcoming 2021-2022 school year. The interim upgrades include adding stop signs on Fern Avenue, and traffic markers to shorten crossing distances and better define travel lanes at the intersection.  The four-way stop is now in place.