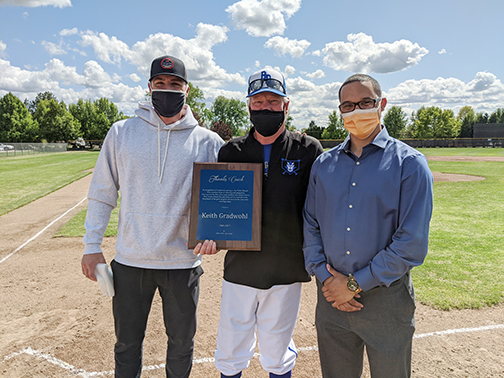 Longtime Walla Walla High School baseball coach Keith Gradwohl was honored prior to the game with Southridge May 4 for 41 years of coaching. Gradwohl’s motto of have fun, play hard and be coachable was the foundation of his program over the years.

“Baseball is a lot like life, it’s not always going to go your way and you’ve got to learn how to deal with it,” said Gradwohl. “We talk to our kids all the time about how baseball prepares you for life.”

Former baseball players Eric O’Flaherty (Class of 2003) and Moe Handcox Jr. (Class of 2012) surprised their beloved coach prior to the game with a beautiful recognition plaque. Gradwohl told his players O’Flaherty, a former major league baseball pitcher, and Handcox were among the best he ever coached.

“He was kind of the first hard-core baseball coach I’d been around that had a little bit of an edge to him,” said O’Flaherty. “You need that as a young kid and it really prepared me for pro ball.”

Handcox said other than his dad, Coach Gradwohl was the other person who challenged him to have confidence and believe in himself.

“Without confidence the ability kind of goes away,” said Handcox. “Grady really drilled that into me and I still refer back to those conversations to this day, whenever I’m interviewing for a job or trying to better myself.”

Although this is Gradwohl’s last season, the memories will live on.

“There have been a lot of good players and a lot of good kids who have gone on to do great things in our community and in other communities,” said Gradwohl. “I’m just proud to be a part of it.”