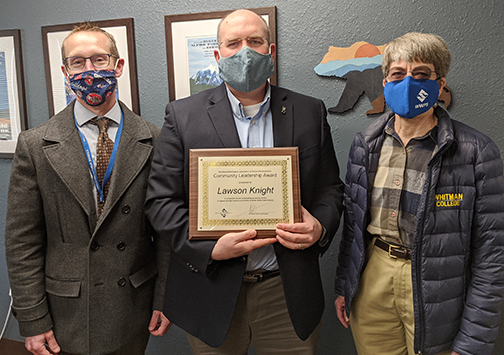 Local financial advisor Lawson Knight has been selected to receive the 2021 Southeast Washington Association of School Administrators Community Leadership award on behalf of Walla Walla Public Schools. He will be honored in June along with other individuals representing regional school districts. This week Superintendent Dr. Wade Smith and School Board member Ruth Ladderud surprised Knight at his Walla Walla office with the award announcement.

“Our future depends on equipping our children with the skills, critical thinking and love for learning to sustain our community and society,” said Knight. “I want to be part of helping produce an educational experience that makes this possible for all children, not just mine.”

Knight was born in McMinnville, OR but was raised in Seward, Nebraska. He graduated from Central High School, Monmouth-Independence, OR in 1990 before attending Oregon State University and University of Lyon, France.

Knight is a financial advisor with Edward Jones in Walla Walla. He has also served as Executive Director of Blue Mountain Community Foundation during his time in Walla Walla. His professional resume also includes serving as Development Office and Campaign Manager for the Oregon State University Foundation.

Knight earned the Philanthropy Northwest Mary Helen Moore Volunteer-of-the-Year award in 2012. He was also honored by the Walla Walla Valley Chamber of Commerce with its Not-for-Profit Organization of the Year 2012 for his work leading the Blue Mountain Community Foundation.

“Walla Walla Public Schools is fortunate to have Lawson Knight as one of its strongest supporters,” said Superintendent Dr. Smith. “Lawson’s leadership and involvement helps the district realize its vision of Developing Washington’s Most-Sought After Graduates.”