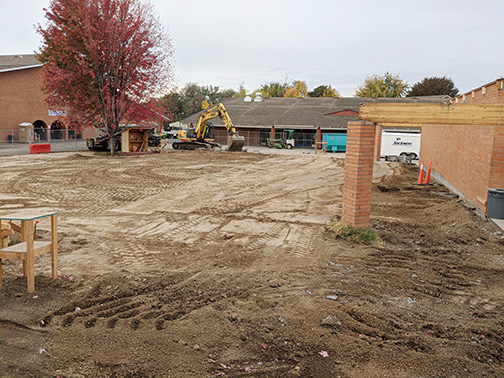 Bond construction rolls on across the district as renovation projects at Wa-Hi and Pioneer MS are in full swing. Walla Walla’s Gillespie Roofing is replacing the original 35-year-old roof on the Wa-Hi Vocational Building, contractors are beginning the 8,000 sq ft addition to the Wa-Hi Performing Arts Auditorium, work on the new fitness addition is underway and the culinary arts addition off the library building is making progress. At Pioneer MS, contractors are focused on renovating the 1950’s wing, gym, office and cafeteria areas.

What’s next for Wa-Hi this school year?

• Art, pottery, marketing and culinary arts addition on the south-end of the library building

• New 7,000 sq ft Fitness addition on the west-side of the main gym

• New 8,000 sq ft Performing Arts addition on the west-side of the auditorium.

• In early September, Jackson Contractor Group completed the new Science Building in time for teachers to use the new building for teaching.

• The design team completed work on the culinary arts classroom and submitted it to Jackson for review and pricing.

• The design team began to work through reviewing and approving submittals to ensure the construction activities are in line with the design intent.

• Commissioning activities were ongoing to ensure that new HVAC, plumbing, fire alarm, and electrical equipment were working in the correct manner. Documentation presented to the district.

• Hazardous chemicals were removed from the old Science Bldg and disposed of by Clean Harbors.

• Nelson Construction installed egress doors in the Library as well as a new doorway into the north wing’s temporary computer room.

• Jackson Contractor Group began to mobilize on site and also initiated getting temporary fence installed to keep students out of the construction area.

• Architects West and their team began to work through reviewing, responding to, and approving submittals to ensure that the construction activities are in line with the design intent.

• Jackson began work on a construction schedule in order to communicate with the district and Pioneer staff to ensure proper coordination.