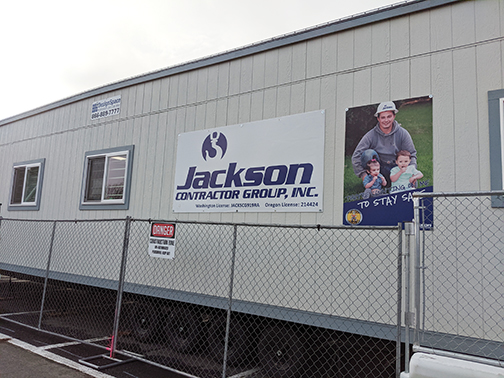 Jackson Contractor Group is reaching out to SEATech Construction Technology teacher Eric Matson to see if more of his former students are available for hiring following the success of other recent graduates on Jackson’s crews. Matson says for the past three years Jackson Contractor Group and SEATech's Construction Technologies have worked together to create a long term partnership to give students the opportunity to learn the skills needed  to transition into the construction industry.

Jackson Contractor Group has recently hired three SEATech graduates for local and regional work and are looking to hire more carpenters and laborers for the Walla Walla High School and Pioneer Middle School projects and Pasco job sites.
“Of the candidates that I have interviewed, the SEATech students have better interview skills than the rest, hands down,” said Project Superintendent Chris Webb. “They also have a good understanding of construction in general and know how to work.”

Webb also reports the SEATech students have a tremendous work ethic and are in the company’s long-range plans.

These projects are prevailing wage government jobs and hourly rates for these positions start at $32 per hour. Matson is reviewing his list of former students and is planning to send potential candidates to Webb soon.

“The success of our graduates embodies the vision of Walla Walla Public Schools to Develop Washington's Most Sought-After Graduates,” said CTE and SEATech Skills Center Director Jerry Maher. “We are very proud of our students for investing time and effort into their education and utilizing their skills to pursue careers that are in high demand.  They are setting a great example for students who are interested in following in their footsteps.”