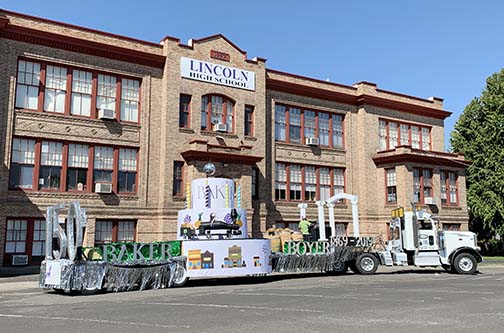 Congratulations to Lincoln High School for designing and building the Baker Boyer Bank 150th Anniversary float which won Best of Show in the Walla Walla Fair and Frontier Days parade. Baker Boyer tapped the students of Lincoln High School in Walla Walla to collaborate with them on a showcase project to help commemorate the Bank’s Sesquicentennial.

The collaboration began in late 2018 when a committee of Baker Boyer employees began meeting to develop a few “signature events” for its 150th Anniversary year. As Events Coordinator Victoria Weeks recalls, “As the presenting sponsor for the Frontier Days Parade, we thought it would be great to “go big” with a float this year. We’ve admired the incredible work the Lincoln High students have done for many years in the holiday electric light parade, so we reached out the Jeremy (Gradwohl) and Marci (Knauft) to see if there would be interest in helping us out.”

After the first meeting with the Baker Boyer team, Knauft (Lincoln’s principal) and Gradwohl (program director, 21st Century Community Learning Center) quickly agreed to take on the project. “I knew the students would be honored and thrilled that Baker Boyer recognized their prior work on parade floats and entrusted them with this project,” said Gradwohl.

Fully funded by Baker Boyer, the float design, material selection, and construction have been completed by the Lincoln team of students, staff, and volunteers. Made primarily out of wood and painted canvas, the focal point of the float will be a massive, triple-layer birthday cake that will be over 13 feet tall and 15 feet wide. It will be topped off with colorful four-foot tall birthday candles, an explosion of bubbles, and a disco ball. The float will also feature six-foot tall numbers celebrating the 150th anniversary of Baker Boyer along with a variety of design elements created to emphasize the relationship between Baker Boyer Bank and the local community. These design elements include: an operational replica of the “Rawhide Rail” train commissioned by Dr. Dorsey S. Baker in the late 1800s and hand-painted art depicting mid-19th century Walla Walla and a sampling of agricultural products that symbolize the Walla Walla Valley. The 48-foot flatbed trailer on which the float is being built was donated by Mountain Hi Truck and Equipment in Walla Walla. The float is being built in the parking lot at Lincoln High School.

The project had a setback in August when all the project’s power tools – over $1500 worth—were stolen from a locked van in the Lincoln High parking lot. The theft was documented on video and law enforcement continues to work to apprehend the criminals. In the meantime, Baker Boyer employees loaned the team the necessary tools to finish the project.

“We are so proud and appreciative of the creativity and hard work from the Lincoln High students, staff, and volunteers,” explained Jim Wilson, Marketing Director. “This float will be a wonderful way to celebrate Baker Boyer’s 150th Anniversary with the families and businesses of the Walla Walla Valley.”